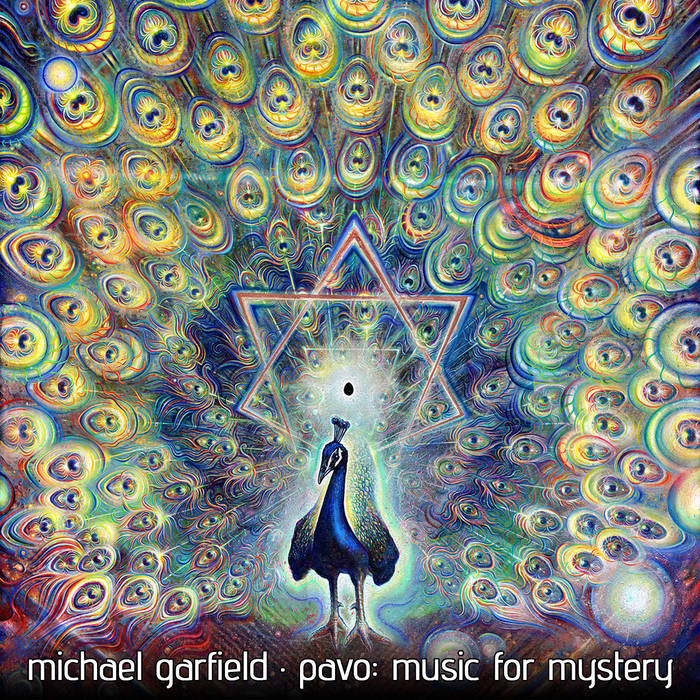 Max CCT It's been a long time since I heard anything this new, interesting and engaging (and I listen to a lot of weird music!). Truly loved this album from start to finish.

This record captures one of the most inspired evenings of my life, on Valentine's Day 2017, a live set I donated to my friend Adam Scott Miller's immersive art class in Byron Bay, Australia - so it's only fitting that his gorgeous painting is the cover image for these tunes.

For deepest impact, I encourage you to read up on the mythic influences that inspired and guided this release in the attached "links to follow" PDF.

I am a Capricorn, born on 8 January under the fixed star Delta Pavonis in the contellation of the peacock. Only after this was all recorded and the track art chosen did I realize that the persecuted Yezidi people link their "peacock angel" Melek Taus with Enki, the Sumerian sea goat, and with St. George (the more human, earthly form of Michael the Archangel), and the Pleiades (a constellation that for some strange reason I have always felt a deep affinity).

Enki was responsible for the decay of the original one language into all the modern tongues – the god of entropy and babble – which is weird, because the peacock angel also plays a major role in one of my most cherished books – Darwin's Pharmacy: Sex, Plants, and the Evolution of the Noosphere by Richard Doyle – in which he makes the case that by an involution of attention on itself, the psychoactive plants created the diversity of human languages as well as our aesthetic sense. Doyle argues Melek Taus is an irruption into history of a transcendental telos, guiding evolution through trans-species intercourse and boundary-dissolving peak experiences. (Read this book, if you can handle it.)

Discovering this web of correspondences has shaken my reality. Why did I become obsessed with the evolution of language and consciousness in college? Why have I always identified with peacocks? Why do I emphasize the breakdown of a signal into noise in all my music? Who are we, and who is rigging this?

Feel free to write to me or comment with your thoughts and feelings upon listening, or if you have more insights into this extraordinary mystery...

I hope that you enjoy it. Thanks for listening. :)

Stream this album on Spotify:
open.spotify.com/album/6phgaN47Le5IeOXE4DUndB

1 - 10 recorded at Paradise One
in Byron Bay, New South Wales, Australia on 14 Feb 2017
for an art class led by Adam Scott Miller

Released under a Creative Commons BY-NC-SA 3.0 license by
michaelgarfield.net

imagination is our greatest natural resource.